Here’s a sneak preview of the semi-final cover art for my next non-fiction book, Bootleggers, Lobstermen, and Lumberjacks: Fifty of the Grittiest Moments in the History of Hardscrabble New England, due out October 5, 2010 (but available for pre-order now!): 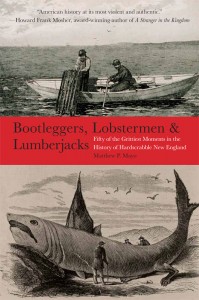 In Bootleggers, Lobstermen, and Lumberjacks: Fifty of the Grittiest Moments in the History of Hardscrabble New England, author Matthew P. Mayo presents 50 narrative-driven tales covering hundreds of years of incredible, true accounts of Indian abductions and all-out wars; of timber-tough men in the golden age of New England logging; of suspected witches being hung and crushed by stones; of savage storms, fantastic shipwrecks, ruthless pirates, and half-starved castaways; of train wrecks, blizzards, and nor’easters; of the hair-raising exploits of rumrunners, smugglers, and bootleggers; of hardworking lobstermen driven to settle their differences any way they can; of hill farmers with fast cars during Prohibition doing their best to survive in the challenging and unique locale that is New England—as much a place as a state of mind.

Here’s a taste of what’s inside:

• The Pilgrims’ first winter is a time of disease, starvation, and death

• Every month in 1816 saw a killing frost, and famine swept through New England

• A R.I. girl’s corpse is mutilated, then her family inhales the fumes of her burning organs

• The mother of all logjams rips apart a Vermont town

• A high-speed Vermont booze-run ends in a shooting, a car wreck, and a dead boy