At long last, it’s the anthology everyone’s been barking, howling, and growling about…. 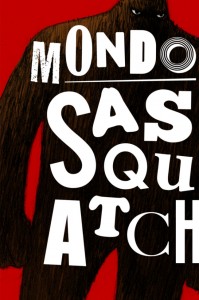 Now it can be told! MONDO SASQUATCH, a Bigfoot anthology, is stalking through the forest on its way to a summer release! Under the “Bookgasm Presents” banner, Mondo Sasquatch is exactly what its title promises: A Bigfoot anthology with 15 offerings that will leave you frightened, bewildered, excited, aroused, and nervous.
More information is on its way, but in the meantime, dig that groovy cover and feast your eyes on the contents:

• “I Have Always Wondered What Bigfoot Meat Tastes Like: An Introduction” by Louis Fowler

• “Bigfoot Must Die” by Frankie Marino

• “From Hell’s Heart” by Desmond Reddick

• “The Ballad of the Skunk Ape” by Jarret Keene

• “The Encounter” by Mike White

• “The Tragic Hazing of Bryan Igfoot” by Eric Dimbleby

• “Theodore Roosevelt and the Great American Anthropoid” by Bill Adcock