I was just invited to write a book in the hot new series, THE DEAD MAN, and I couldn’t be more pleased. The first installment, THE DEAD MAN: FACE OF EVIL, was a blast to read and I can’t wait for follow-up volumes. Fortunately, I won’t have to wait long. The second, THE DEAD MAN: HELL IN HEAVEN, is due out soon. 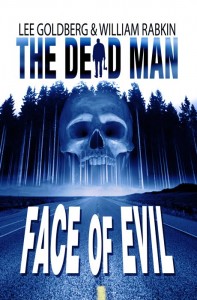 So, just what is THE DEAD MAN? THE DEAD MAN is an original ebook series of short novels that blends the horror of Stephen King’s THE GUNSLINGER with the action/adventure of Don Pendleton’s THE EXECUTIONER…

Matthew Cahill is an ordinary man leading a simple life…until a shocking accident changes everything. Now he can see a nightmarish netherworld of unspeakable evil and horrific violence that nobody else does…. For Cahill, each day is a journey into a dark world he knows nothing about…a quest for the answers to who he is and what he has become…and a fight to save us, and his soul, from the clutches of pure evil.

FACE OF EVIL, the first book in the series, was written by Lee Goldberg & William Rabkin, was released on February 20th, and will be followed in coming months by more all-new adventures of THE DEAD MAN by some of the most talented and successful mystery, western, horror and scifi authors out there today, including Bill Crider, James Reasoner, Matt Witten, Joel Goldman, James Daniels, Burl Barer, David McAfee, Mel Odom, Harry Shannon, and…Matthew P. Mayo!

Want to know more? Visit The Dead Man on the Web:
http://thedeadmanbooks.blogspot.com

And check out this fine entry at Amazon’s Kindlepost.com:
http://www.kindlepost.com/2011/03/resurrecting-a-genre-with-a-dead-man.html