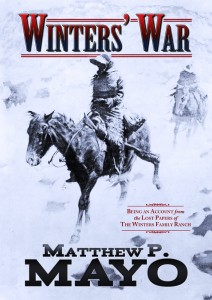 I’m pleased to announce the release in ebook format of my 2007 novel, WINTERS’ WAR. Never before released in the US, this novel began its life in hardcover for the Black Horse Western line by the publisher Robert Hale, London, UK, after which it was released in large-print as a softcover. Now revised and expanded — and with stunning new cover art — the new Gritty Press release of WINTERS’ WAR appears as I originally intended it, as the first in a series of accounts about the Winters family, ranchers in the shadows of Wyoming Territory’s Teton Range more than a century ago.

Since WINTERS’ WAR first came out, readers have asked, “What happened next to Jenna and Niall Winters? Will there be more stories about the Winters family?” I’ve provided some of those answers and hinted at others in this newly revised and expanded version of WINTERS’ WAR. This new version establishes it as the beginning of a family saga, not unlike “The Big Valley,” “Bonanza,” Dr. Quinn,” and Louis L’Amour’s Sackett series.

As mentioned in the novel’s new Foreword, not long ago while out West on a research trip I found a trove of old, forgotten documents at the abandoned Winters Family Ranch in Wyoming. They chronicle that family’s long, rich history. And as I continue to explore them, I imagine I’ll be riding shotgun exploring the West with various members of the Winters family as they slide into scrapes, track rustlers, instigate hijinks, love and grieve, find and lose fortunes, and in general, live full lives at and around the Winters Family Ranch. Saddle up, it’s going to be a heck of a ride!

Click here for the Kindle version. (Coming soon in an epub version and a handsome trade paperback version….)