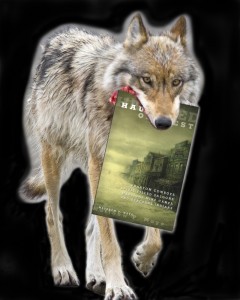 In the early 1800s, along the Devil’s River in Texas, a trapper’s wife goes into labor. The trapper rides to a Mexican village for help, but dies on the way. The villagers find his wife, also dead, but of the baby, there is no sign, though inside and out of the cabin are the tracks of wolves. Over the ensuing years, people see a wolf pack with an oddly hunched member. She is captured once and many witness her before she escapes. To this day, she is seen, surveying strangers from across the river, misshapen and nursing wolf pups, howling and loping the banks of the river.

Skull-cracking thunder drowned out all sound, including the approaching howl of wolves. The night was near-black, save for the slashes of harsher-than-noonday brilliance as lightning stitched through the raw, clacking branches of the cottonwoods. John Dent kept the river to his left, hugging it, and urged the horse forward, concentrating on getting to the village for help. His poor Mollie . . . he knew now he never should have brought her out to this wild place, especially so close to giving birth. And now she was having trouble.

She was a tall, thin woman, who’d half-jokingly told him she did not have the hips that would make her good at birthing children. He almost smiled at the thought of her, but no, this was no time to fall to musing. She was back at their little trapper’s cabin, giving birth to their firstborn, and he had to make all haste to get help for her. He knew only how to take life, how to skin a carcass, strip a wolf’s hide from its meat and bone—not how to bring a life into this world.

Without warning his horse balked, great clouds of breath pluming from its snout and its eyes rolling white. It fought him hard, jerking side to side, low gargling whines of fear boiling up from deep in its chest. He’d only ever seen the beast this bothered once, but it had been wolves then, a pack of them closing in one night more than two months before. But it couldn’t be wolves out on a night such as this, vicious wind and rain lashing down, the river filling higher with each second.

And then John Dent, too, felt instant, trembling fear deep in his core. It was the earthy wet-hair stink of meat-eating animal, close and drawing closer, its breath seeming to cloud in his face. His horse whinnied beyond a scream and lost its footing. Dent felt its powerful muscles work frantically to regain solid footing, but there was none to be had, and within seconds, despite his slashing of the reins and jamming the beast hard in the gut, the horse rolled down the bank of the storm-swollen Devil’s River.

Lightning sliced the blue-black night, sizzling the wind-driven rain, and time seemed to slow as John Dent slammed down the muddy riverbank. Just before the horse rolled over him, driving him into the river, he saw in the lightning’s flash, far above him on the bank, the stark outline of wolves in a ragged line, staring down at him, jumping back and forth over one another, snarling, baying, angry that they had lost such a rich opportunity to the cruelties of weather.

Just before he died, Dent felt himself being dragged along by the roiling river. And though the flow’s voice was in fine, full form that night, he swore he heard above it the howl of wolves, as if mocking him, laughing at him. Then they were gone, and John Dent’s horse-battered body spun downstream.

“There is the gringo trapper’s cabin. Poor man, he and his horse must have fallen in the river, perhaps in the storm days ago. They were both found drowned.”

“But he was married, no? We shall have to tell his wife.”

Mario scowled. Just because he was still unmarried did not mean he would always be so. But he said nothing, just nodded. As they drew closer to the cabin, they realized something was wrong. The chimney sat silent, no smoke trailing from it, then they saw the door was open, swung inward. The two men exchanged looks of concern. For the fall of the year, this would never do. Perhaps the woman was cleaning the place?

“Quiet, Mario. Something is wrong.” He nodded at the muddied earth. The clearing surrounding the cabin was pocked with many paw prints.

They entered the open door of the cabin and their hands cupped their mouths, then covered their noses, and they turned away. Back outside, both men began crossing themselves. “Madre Dios,” muttered Mario.

For some minutes, neither of them said anything else, then Jorge said, “We have to bury her.”

“Si. But I was told she was with child.”

They both looked back in the dim, chilled interior, at the muddy paw prints leading in and out of the cabin. “Not anymore.”

Was the baby raised by wolves? Buy the book and find out! Mwahahahaha!

Yes, folks! It’s HAUNTED OLD WEST! From romance and robberies to cowboys and Indians, the Old West is filled with phenomenal happenings, curious mysteries, and ghastly ghosts that are sure to send a chill down any spine. Haunted Old West is the petrifyingly perfect collection for any campfire gathering. Grab a copy … if you dare!