Hot Off the Gritty Press! 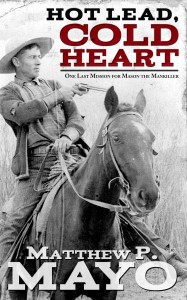 HOT LEAD, COLD HEART: One Last Mission for Mason the Mankiller. It’s the new GRITTY PRESS version in ebook and paperback formats of my 2008 novel. Never before released in the US, HOT LEAD, COLD HEART started out as a hardcover for the Black Horse Western line by London, UK, publisher Robert Hale. Then it came out the next year as a large-print softcover.

The new GRITTY PRESS version is revised and expanded, reformatted in and out, and sports amazing cover art! (It also includes a sample chapter of the next book in the Roamer series: THE GREENHORN GAMBLE).

But back to HOT LEAD, COLD HEART…. Who’s this Mason the Mankiller fella, and why’s he so riled up?

His Honor Newland Pontiff III, late of Exeter Territorial Prison, now presides over a vast tract of land with the ambitious town of Cayuse Falls at its center‚ town he’s confident he can transform into the ‘Washington of the West,’ given enough time. But a demon from his past haunts the horizon, and time is running short.

Mason the Mankiller, vigilante hero to the downtrodden, has come out of retirement to settle one last score‚ the only one that ever mattered‚ with a man who long ago forgot he’d wronged the famous ‘killer of killers’. A tonic peddler, vengeful sisters, and a reluctant lawman all dog Mason’s trail. But he vows that nothing will stop him from seeing this last mission through to its end‚ an end he knows he won’t survive.

Pick your poison: Kindle, NOOK, Kobo, or paperback, then sink spur, and hang on!