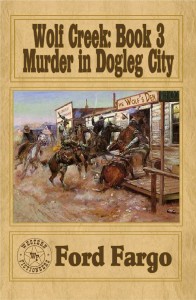 MURDER IN DOGLEG CITY, to be precise…. Just released (in ebook and paperback), it’s Book 3 in the WOLF CREEK series of multi-author novels by the members of Western Fictioneers.

A pile of Western authors came up with characters to populate the fictional town and write chapters based on an outline by series’ editor, WF President Troy D. Smith, who then added his own magic, smoothed and shaped, and pulled it all together. The resulting novels–three so far with several more in the works–are written under the collective pseudonym of “Ford Fargo.”

My character, one-armed Rupe Tingley, swamper and town drunk, makes his wobbly self known throughout the book, and I was able to flesh him out more fully in chapter five. Maybe we’ll see more of Rupe weaving on down the road, but only if he survives … MURDER IN DOGLEG CITY!

About WOLF CREEK, BOOK 3: MURDER IN DOGLEG CITY:
Dogleg City is what folks in Wolf Creek call the seedy part of town. Life is cheap there, and death is common. At first this murder seemed like any other — but the more Marshal Sam Gardner and his deputies learn about it, the more it seems this death will blow Wolf Creek wide open.…

About the author: Beneath the mask, Ford Fargo is not one but a posse of America’s leading western authors who have pooled their talents to create a series of rip-snortin’, old fashioned sagebrush sagas. Saddle up. Read ’em Cowboy! These are the legends of Wolf Creek.