The Before-, During-, and Afterglow….

We made it back from the Southwest largely intact. Though it is entirely possible we left a few empty wine and bourbon bottles bobbing in our wake….

We began our trip in Vegas for a night a couple of weeks ago. We then rambled on out of there just as the Electric Daisy Carnival (EDC) kicked into high gear for the weekend. It brought tens of thousands of young electronic-music fans into the hotels and streets and clubs of the neon navel of Vegas.

But no matter to us, we were already on our way to Zion National Park. And it was as stunning as one might expect: 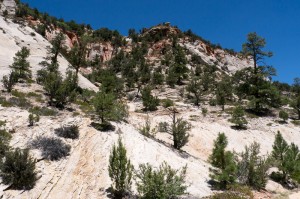 Next we made our way to Bryce Canyon National Park, aka Hoodoo Central. Again, another utterly amazing place: 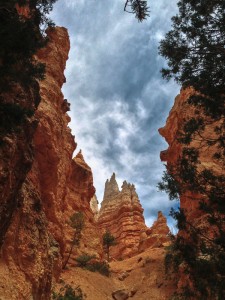 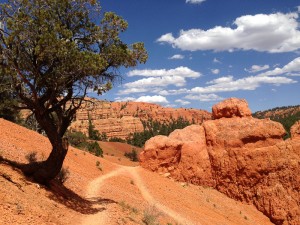 And Saturday found us in a cool little cabin at Kodachrome State Park, with its own collection of hoodoos and unbeatable vistas. We stayed there for a couple of nights before venturing on … 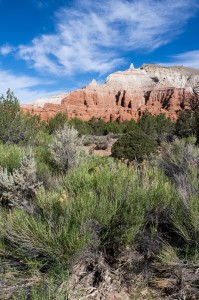 to the North Rim of the Grand Canyon. We were fortunate to visit the South Rim a few years back, so it was great to bookend that experience with this one. We stayed in a cabin right on the rim and the views were incredible! Magnificent! Stunning! Words are not enough (which should be painfully obvious at this point)…. 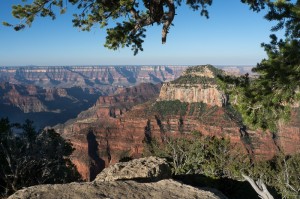 Tuesday, we traveled back to Las Vegas, from 65 degrees at the North Rim to 104 degrees. Yowza. But we were on a mission: to find our Western Writers of America (WWA) friends at the Riviera–the ol’ stomping grounds of the Rat Pack! This year marks the organization’s 60th anniversary!

We found ’em (our friends, not the Pack–Sadly, Dino, Frank, and Sammy were nowhere to be found), partying it up in the penthouse ballroom at the Top of the Riv. And from then on the week was a whirl of days and nights getting reacquainted with all our WWA friends. Some we hadn’t seen in several years, and yet, as is the way with friends, it was as if we had seen them but a few days before. 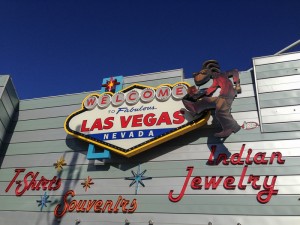 Saturday night brought the big awards ceremony, the Spur Banquet. This was the week’s final event and I was honored to receive a Spur Award for Best Western Novel for Tucker’s Reckoning. One of the high points of the evening was meeting legendary writer Jory Sherman, winner of this year’s Wister Award for Lifetime Achievement. Another fun moment was chatting the evening’s emcee, actor Jim Beaver (of Justified and Deadwood fame). And of course, hobnobbing with all my WWA friends, including second-time Spur Award winner Larry D. Sweazy, John D. Nesbitt, and so many more! 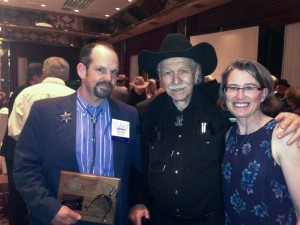 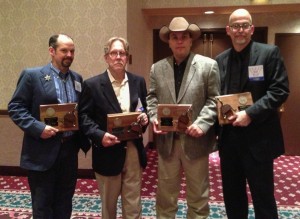 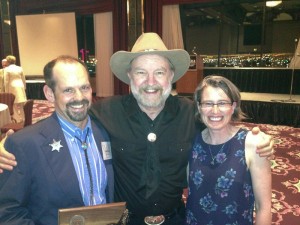 I’m still pinching myself over winning the Spur. As I type this, it hangs on my office wall, jingle-jangle-jingling. I find myself occasionally glancing over at the wall for affirmation that I’m doing what I should. It’s a good feeling. I wish everyone a dose of such happiness!