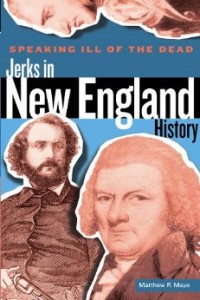 My newest book has just been released, and it is one of the most delicious I’ve had the privilege to research and write. The title alone should explain why: SPEAKING ILL OF THE DEAD: JERKS IN NEW ENGLAND HISTORY. In addition to dishing the dirt on a number of New England’s nastiest baddies and incompetents, I had fun once again digging around the rich, overgrown garden patch that is New England history.

JERKS IN NEW ENGLAND HISTORY clocks in at 232 pages, sells for $16.95 in a 6. x 9 softcover, and I just know it would make a dandy Christmas present (hint hint)! Here’s a quick run-down of what’s inside:

The lives of notorious bad guys, perpetrators of mischief, visionary–if misunderstood–thinkers, and other colorful antiheroes, jerks, and evil doers from history all get their due in the short essays featured in this enlightening, informative book.

Award-winning author Matthew P. Mayo’s SPEAKING ILL OF THE DEAD: JERKS IN NEW ENGLAND HISTORY features twenty short biographies of nefarious characters, from a number of villainous pirates to that hero-turned-traitor, Benedict Arnold. From the brilliant-but-bullying Samuel Colt to that hot-headed Puritan, John Endecott. From Charles W. Morse, serial monopolist, cheat, liar, and swindler, to Emeline Meaker and Mary Rogers, otherwise known as the Vermont’s Lady Killers. And many, many more tales of foul New Englanders doing their best to be bad.

Take a peek–you won’t believe the depths of jerkiness to which these nefarious New Englanders stooped!