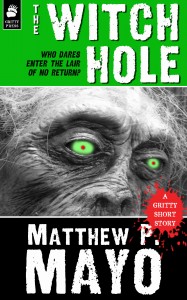 Gritty Press is in the midst of releasing revamped, revised versions of a number of my older short stories, many of which are no longer in print. I’m giving them all a good going over, tightening, loosening, expanding, contracting, scrubbing, and polishing them as needed. They run the range from Western to sci-fi, fantasy to horror, hardboiled crime to straight-up action, and they’re jam-packed with barbarians, time travelers, pirates, cowboys, drug addicts, and other such curious creatures.

It’s been fun and enlightening for me to revisit these stories, and gratifying to see them once again out  and about in the world, in freshly spiffed, readily available e-book versions. And speaking of … these Gritty Press releases also sport some of my favorite covers ever. Turns out uber-photographer Jennifer Smith-Mayo is also one heck of a graphic designer (but we knew that).

But wait! It gets better: They’re priced right—a mere 99 cents a pop! Ideal for a slice of distractive entertainment on the bus, train, plane, or auto (passengers only!). 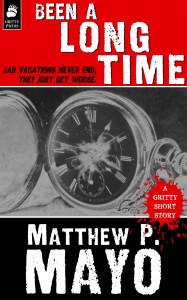 Over the next many weeks and months, Gritty Press will continue to release a veritable slew of my stories and novellas—some revised, some new-and-never-published. The first two offerings are already available: A dangerous horror short story, THE WITCH HOLE, that has apparently creeped out a number of readers (excellent, I say!), and BEEN A  LONG TIME, a Western sci-fi time-travel story that makes the argument that vacations should be avoided at all costs….

Buy your copies soon! And hurry! I need more coffee, I tell ya! I’m runnin’ low on the jitter juice and I’ve left an intrepid jungle explorer in a right terrible situation….