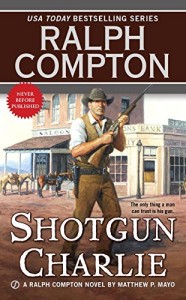 Ha! Just when you thought it was safe to leave the house … my latest action-packed Western rides into town on June 2! SHOTGUN CHARLIE, another for the Ralph Compton line, is a prequel to my 2013 novel THE HUNTED. This one takes place back when reader favorite Big Charlie Chilton was still a stripling, and brings him face to face with hard characters and harsh circumstances that earn him a nickname he does not like….

Big for his age, young and impressionable drifter Charlie Chilton is taken in by the gruff leader of a gang of small-time crooks and ne’er do wells who sees something of himself in kindly, wayward Charlie. But an ambitious ruffian with a shady past soon joins the gang, convincing Charlie’s friends to pursue a big score. Charlie fails to thwart the crime and the heist turns bloody. As the only gang member caught alive, Big Charlie will soon swing for the very outrages he tried to prevent.

He makes a daring escape, determined to track down Haskell and the gang and prove his innocence. Hot on Charlie’s heels, a mysterious marshal and a posse of angry townsmen track him far to the north, into the High Sierra. Weaponless and with a vicious winter storm closing in, Big Charlie must find the killers and thieves before the seething posse turns vigilante and hangs him high.