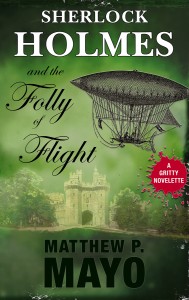 I am pleased to announce that Gritty Press (ahem!) has just released my novelette, SHERLOCK HOLMES AND THE FOLLY OF FLIGHT. Check out that amazing cover art by Jennifer Smith-Mayo her own self!

Are they too late to foil the formidable Lord Ruddy’s murderous scheme? Will a famed French aeronaut’s plans for the ultimate flying machine fall into the clutches of Germany’s notorious Count von Zeppelin?

SHERLOCK HOLMES AND THE FOLLY OF FLIGHT is an action-packed novelette filled with airships, intrigue, murder, swordplay, global espionage, fisticuffs, romance, and more!

Make haste … the game is afoot!