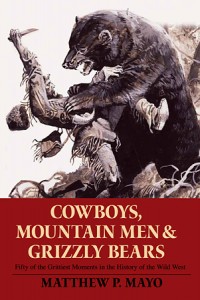 I’m looking forward to seeing the new flick, THE REVENANT, about explorer and mountain man Hugh Glass, starring Leonardo DiCaprio. From all indications it sounds like a winner. Heck, any movie with a whiff of mountain man action in it gets a thumbs-up in my book.

This one has special meaning for me as I’ve researched and written about Hugh Glass extensively. My 2009 non-fiction book, COWBOYS, MOUNTAIN MEN & GRIZZLY BEARS, contains a detailed chapter about Glass’s incredible saga.

Even my book’s cover illustration is a depiction of Hugh’s brutal struggle with the grizzly that nearly did him in! In fact, it’s the same illustration used on the cover of the 2015 novel, THE REVENANT, a fictionalized version of Glass’s saga on which the film is based. (Must be a way to make hay with that particular bit of coincidence, eh? Hmm, maybe I should give Leo a call.) 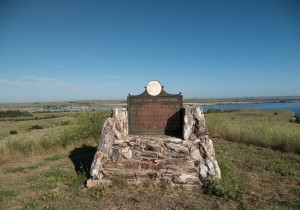 My wife, Jennifer, and I visited the site of Glass’s 1823 attack by grizzly, overlooking the Grand River in present-day Lemmon, Perkins County, South Dakota. The pretty spot is well off paved roads and offers long views of the surrounding rolling countryside. A marker to Hugh Glass tells of his mauling, subsequent incredible journey back from the brink of death, and his quest for revenge. It’s worth visiting, should you find yourself out that way. And keep an eye peeled for grizzlies….