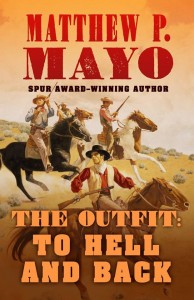 Hard to believe it was May when I last prairie-dogged these pages. What better reason to pop up again than to announce the kick-off of my new series! It’s called THE OUTFIT — think the A-TEAM in the Old West and you’re halfway there. Plenty of cigar chomping, whiskey sipping (real men don’t guzzle the uisce beatha), dove whimpering, fisticuffing, bullet cranking, horse-riding fun.

Book 1, THE OUTFIT: TO HELL AND BACK, is officially released on October 19, 2016 as a handsome hardcover through Five Star Publishing. It’s available for preorder at Amazon and other online sources.

THE OUTFIT: TO HELL AND BACK

Rafe Barr, master tracker, spy, and war hero, is locked away in Yuma Territorial Prison for life, wrongly convicted of the murder of his wife and son. But five years into his sentence, Warden Talbot Timmons, who has made Barr’s time at Yuma a living hell, offers him a deal: full pardon in exchange for rescuing the young daughter of California’s Governor Pendleton from Deadwood’s top bad man, Al Swearengen. Rafe smells a rat, but agrees.

On the trail to Deadwood, Rafe rescues his old pard, explosives expert Cookie McGee, from a dicey situation. In Deadwood, Rafe and Cookie find the girl and a whole lot of trouble, and barely make it out with their skins … only to find their backtrail fogged by El Jefe and his Hell Hounds, a gang of cutthroats and desperadoes hired by Warden Timmons. Rafe, Cookie, and the girl ride hell-for-leather toward the hidden Colorado valley where Rafe’s ranch once stood.

Along the way they pick up a crew of colorful characters with peculiar talents—gambler, safecracker, and former slave Black Jack Smith; feisty widow Arlene Tewksbury; and local doctor, inventor, and drunk Deathbed Jones.

The fuse is lit as a mob of desperadoes and renegades led by the Hell Hounds swarms the ranch, and Rafe, Cookie, and the rest of the gang find themselves in an explosive battle for their lives. And that’s only the beginning for…THE OUTFIT!