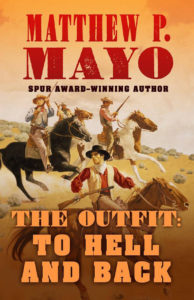 I was pleased to discover a recent thumbs-up review of my novel, The Outfit: To Hell and Back, in one of my favorite publications, True West Magazine. Here’s what reviewer, Bill Markley (whose book, Deadwood Dead Men, is a great read, by the way), had to say:

In Matthew P. Mayo’s The Outfit: To Hell and Back, Rafe Barr, Civil War hero, wrongfully convicted of murdering his wife and son, is serving a life sentence in Yuma Territorial Prison. The warden makes a deal with Rafe to release him if he will rescue the daughter of the Governor of California from a Dakota Territory Deadwood brothel run by the infamous Al Swearengen. The warden sends a band of cutthroats to trail Rafe. After he rescues the girl they are to take her from him and bring her to the warden, and do with Rafe as they please. Along the trail, Rafe meets a cast of characters who help him in his task. The book builds to an explosive ending between good and evil. Mayo writes a darn good yarn you won’t want to put down.