Of Doors and Windows 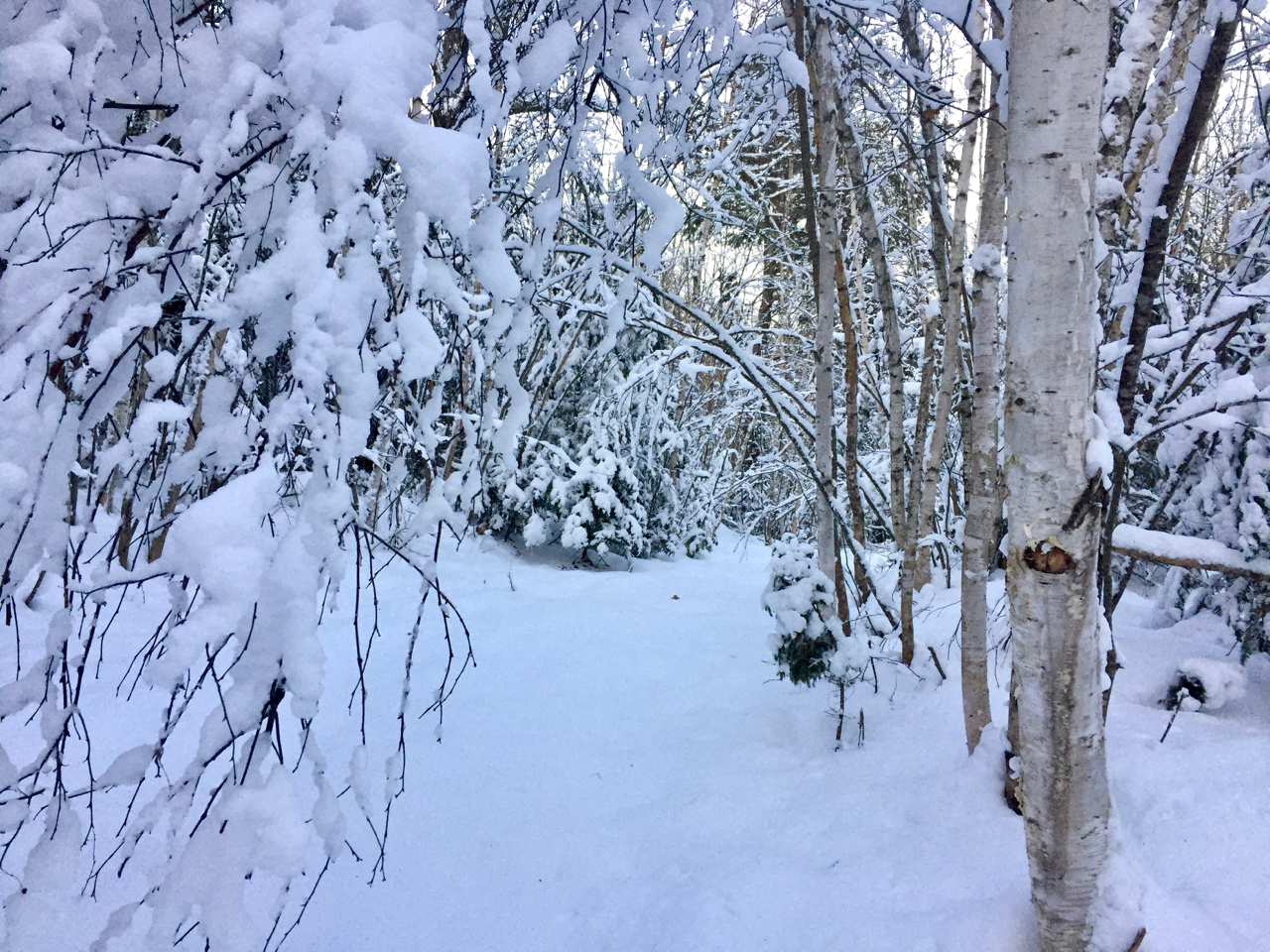 I like the thought behind the phrase, “When a door closes, a window opens.” The idea that opportunity is finite but can regenerate like a phoenix into something new and different has never let me down.

As the door closes on 2018, I’m raising the sash on the window—and jumping through. It’s going to be a good one, I can tell.  I wish a wonderful 2019 to everyone I know … and everyone I’ve yet to meet. 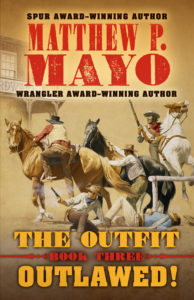 Nicholas Litchfield (of Lowestoft Chronicle) recently reviewed THE OUTFIT (#3): OUTLAWED! for the Lancashire Evening Post and had this to say:

“Bullets zing, blades clang, and heads roll as tarnished heroes and desperadoes converge on the Governor’s mansion and Yuma Territorial Prison, setting up an explosive, thrilling showdown. Fun and fiercely entertaining, Mayo keeps the story moving along at a good clip, and the scene-stealing presence of the depraved head-chopper assassin Mincher helps ensure that this compelling third adventure is the best of the series thus far. Let’s hope that Rafe, ‘Sleuthing’ Sue, Cookie ‘Dynamite’ McGee and the rest of the rapidly expanding gang ride again soon.”

Intrigued? Read Chapter One of THE OUTFIT (#3): OUTLAWED! here…. 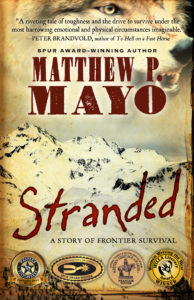 I recently found out that STRANDED has received two more awards, the High Plains Book Award for Best Young Adult Book and the Will Rogers Medallion Award for Young Readers.

The director of the Will Rogers Medallion Awards had this to say about STRANDED:

“The gold medal winner this year is a truly outstanding book. I generally don’t get this carried away, but this is one of the very best books of this year — or any year.”

A judge in the High Plains Book Awards had this to say:

“Anticipation makes the pages fly by. Readers who discover this book will be rewarded with a powerful story of courage and resilience.”

I continue to be amazed by and thankful for STRANDED’s reception by awards committees, critics, librarians, schoolteachers, and, most of all, by readers young, old, and in between.

Thank you so very much.

Hold on to your wigs, kids! Just in time for Hollerween, it’s OUTLAWED! (Book 3 in the jaw-dropping, gob-stopping, hip-popping OUTFIT series!) It’s officially released on October 17, but you can pre-order it here.)

Okay, here’s the lowdown: Cookie McGee finds his trail pard, Rafe Barr, head of THE OUTFIT, near death from a vicious knife attack in a Santa Fe alleyway. The town is a-crawl with soldiers out for their blood, but with Doc at the helm, Ethel the War Wagon slips through. The outlaw duo heads for help in California, but the governor needs THE OUTFIT’s help as much as they need his—he’s being blackmailed by Talbot Timmons, head of covert Confederate group, Brotherhood of the Phoenix, and warden of Yuma Territorial Prison, Rafe’s wrongful address for five hellish years. Then the killer, Turk Mincher, rides in and makes a bloody mess in their midst. Righteous resolution descends at the only place it can—Yuma Territorial Prison, where it all began six years before. Can THE OUTFIT escape unscathed?

Holy moly–STRANDED has won the Willa Award for Best Historical Fiction by the estimable group, Women Writing the West. I am so grateful for this honor, and I continue to be amazed by this book. Go, Janette, go!

STRANDED is a Finalist … Twice!

I’m pleased to share the news that my novel, STRANDED, continues to make ripples on the awards scene. It’s been chosen as a finalist for two more awards: 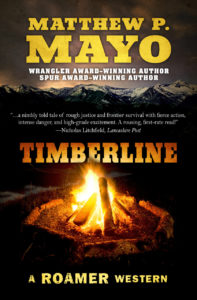 Hey there, Pards! On May 16, 2018, my newest novel, TIMBERLINE: A ROAMER WESTERN, sees its official release in hardcover and ebook versions. Here’s the gritty lowdown:

If that’s not enough excitement for ya, TIMBERLINErecently received two great reviews:

Booklist:
“Veteran author Mayo (The Outfit:Blood and Ashes, 2017) has written a readable and intriguing adventure novel. A train is robbed, a young woman is kidnapped, and the desperados ride off into the night. Roamer, a big man, well-read and articulate but, by his own admission, facially unattractive, sets out on foot to rescue the lovely kidnap victim. The trail leads through blinding snowstorms, avalanches, steep, wind-blown mountain passes, and into unknown territory. As the numbers of dead horses and men start to add up, Roamer comes to understand that the escaping kidnappers are much more than simple thieves. Based in the northern Rocky Mountains at the beginning of the winter months, the tale is an adventure of determination, survival, and surprise. The plot twist at the end only adds to the overall readability of the novel. It is refreshing to read a western where the protagonist is a reader of the classics, has a good vocabulary, and speaks in whole words and sentences. Western fans will enjoy TIMBERLINE.”
— Reg Quist, Booklist

Jen, Miss Tess, and I returned to our wee homestead in Maine late yesterday following a stunning weekend in Oklahoma City, Oklahoma. What, you may ask, were we doing so far from home?

Well, pull up a chunk of oak and warm your hands by the campfire while I tell you. You see, a couple of months ago, I received the amazing news that my novel, STRANDED: A STORY OF FRONTIER SURVIVAL, was selected by the National Cowboy and Western Heritage Museum, in Oklahoma City, as the recipient of the 2018 Western Heritage Wrangler Award for Outstanding Western Novel. The Museum is dedicated to the preservation of Western culture and promotes education of the same. The event began on Friday, April 13, with a morning Q&A with actor, screenwriter, and novelist, Robert Knott. We then toured the world-class collections—inside and out—of the National Cowboy and Western Heritage Museum. A visit to this amazing venue should be on everyone’s list of places to see. That evening, the museum hosted a cocktail reception and book signing. This was followed with a soiree for honorees held at the nearby home of the director of the museum. 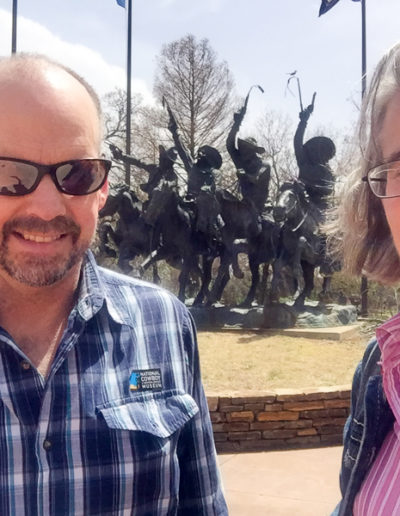 Matthew and Jen tour the grounds. 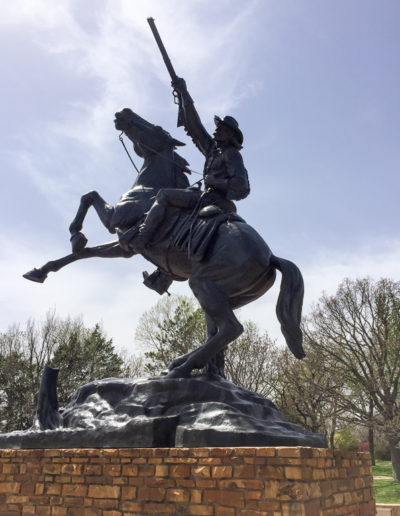 Buffalo Bill in all his oversize glory! 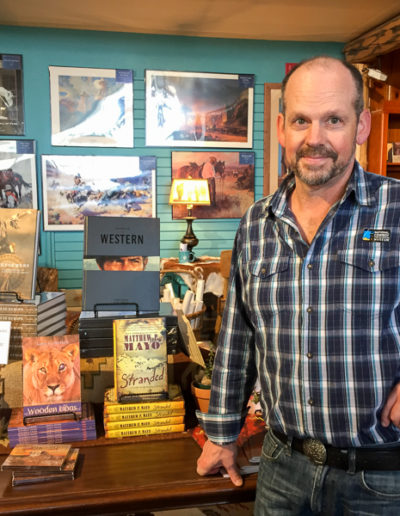 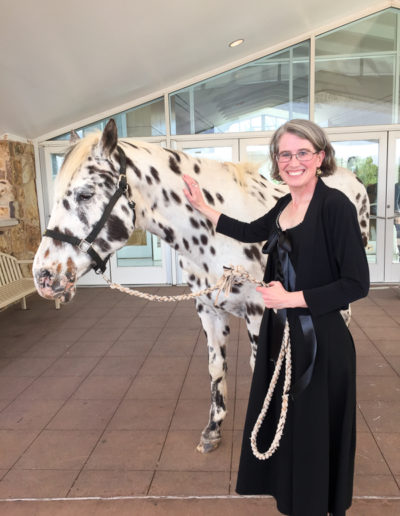 Jen’s figuring out how she can sneak this beauty in her suitcase! 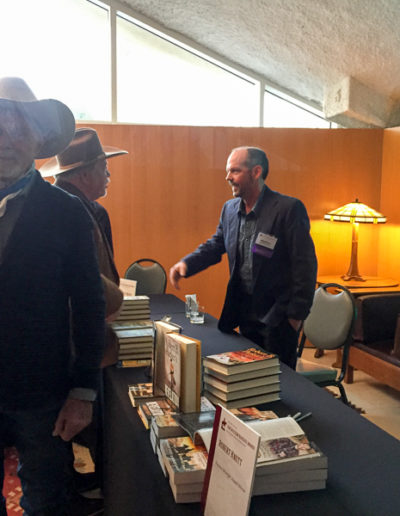 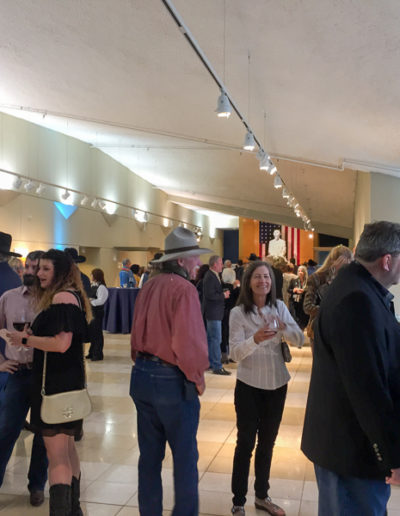 The next day dawned as hot as had been the previous day—80 to 85 degrees, and windy? Hoo doggy, if I wore a wig it would have ended up in Texas by nine. That evening, when the awards ceremony took place, all the movie stars, painters, writers, sculptors, oilmen, filmmakers, ranchers, and rodeo queens converged on the Museum. Jen and I did the same, dolled up in our best bib-n-tucker and shined boots. I must say, my wife, Jennifer, looked especially stunning (always does). I was so very proud to walk in as her arm candy (poor dear, stuck with a sourball like me!). The ceremony was preceded by a fine meal. In truth I picked at my plate, not wanting to miss my cue to drift to the stage for my acceptance speech. The iconic actress, Katharine Ross, and her husband, the equally iconic actor Sam Elliott, emceed the event, and a number of notable folks introduced the recipients. My turn came about thirty minutes into the proceedings when I was introduced by Wyatt McCrea and Bruce Boxleitner. I spoke to the sold-out crowd, thanking everyone I could in my few minutes on stage, then I was given the beautiful (and heavy!) Wrangler Award, a bronze statue of a cowboy on horseback, and led offstage by a genuine rodeo queen! (I am not certain how my wife felt about that. I, however, enjoyed the moment. Ahem.) 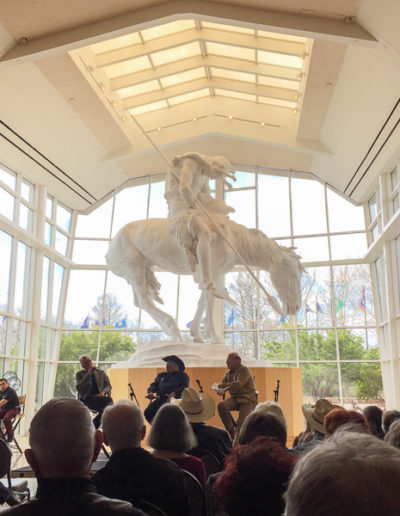 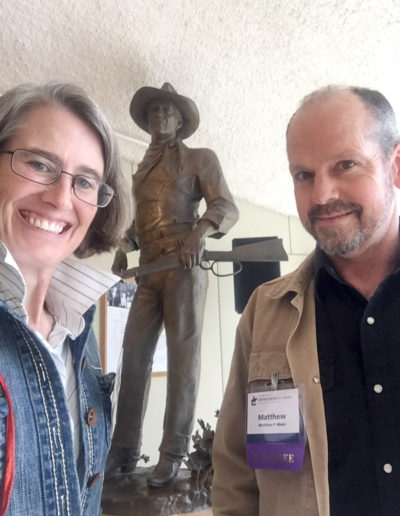 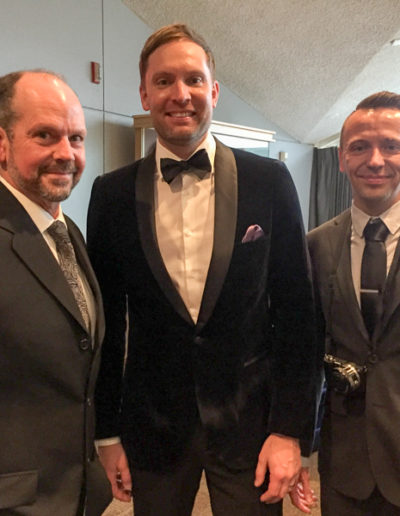 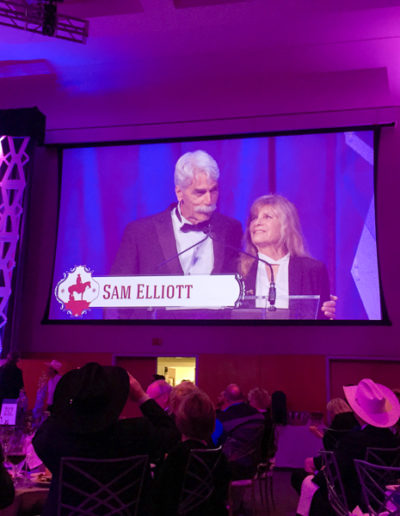 MCs Sam Elliott and Katharine Ross on the big screen. 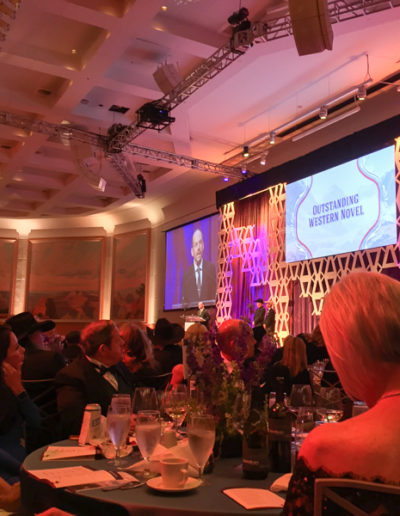 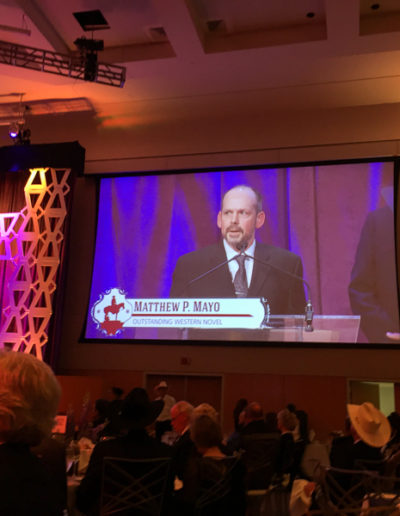 Look ma, I made it to the big screen! 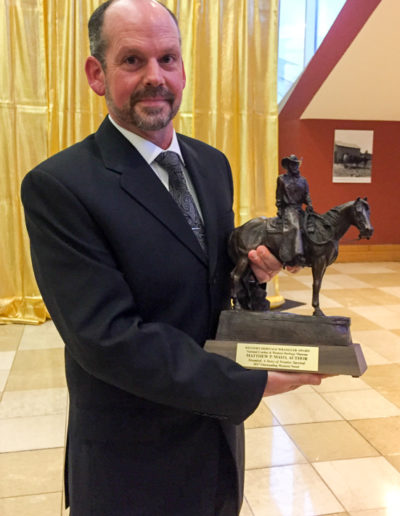 A boy and his horse…. 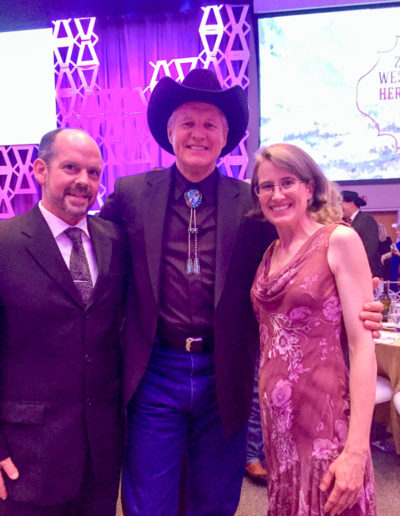 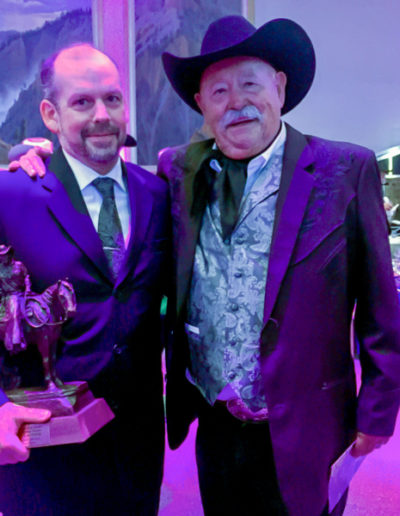 Matthew with Barry Corbin, freshly inducted into the Hall of Great Western Performers. 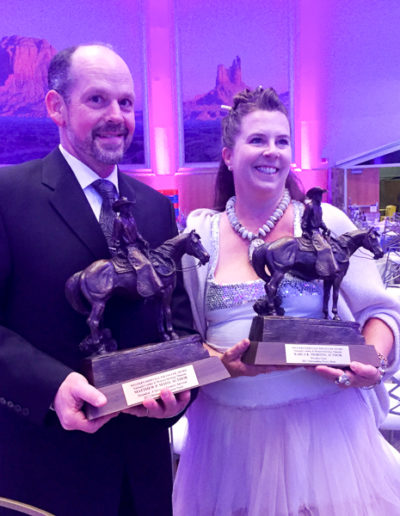 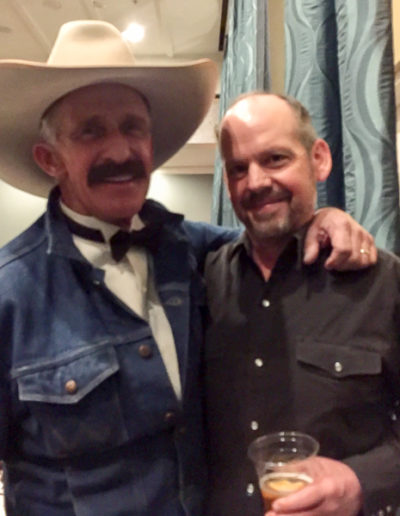 No, no, I won’t name drop. I won’t do it. Oh, okay. After all, how often does one get to talk movies over a cuppa joe with Bruce Boxleitner? Yes, we did. And a more gracious person you will not meet. Unless, perhaps, you run into Buck Taylor, or Wyatt McCrea, or Barry Corbin, or Sam Elliott, or Katharine Ross, or RW Hampton, or Michael Martin Murphey, or Robert Knott. Yep, we met them all, and many more kind Western folks, and we are richer for it. Our humble thanks to the National Cowboy & Western Heritage Museum for hosting this, the 58th annual Western Heritage Awards. To have my novel, STRANDED: A STORY OF FRONTIER SURVIVAL, recognized by this institution, and for this honor, is a dream from which I’ve still not awakened. And I hope I never do.

I am pleased to announce that my novel, STRANDED: A STORY OF FRONTIER SURVIVAL, has won the 2018 Spur Award for Best Western Juvenile Fiction from Western Writers of America.

This grand news, following on the heels of the announcement that STRANDED won the 2018 Wrangler Award for Outstanding Western Novel, has left me smiling. Humility be darned, I am one proud papa.

BONUS: As this is my second Spur Award (my first was in 2013 for Best Western Novel for TUCKER’S RECKONING), I’ve been told that now my horse will no longer gallop in circles…. Onward!

Most of all, my heartiest congratulations to this year’s Spur Award winners and finalists. I am honored to be in such grand company. And I hope to see you all in Billings in June at the annual WWA Convention! 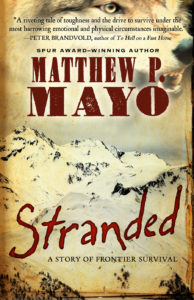